This article is about TimescaleDB, a postgreSQL extension, specialized in storing Time Series data. The purpose is being able to easily manage data coming almost sorted on a time dimension. Log or audit events for instance.

PostgreSQL 10 introduces a real partitioning scheme. Before that, users had to resort to inheritance, writing triggers themselves on a parent table, and it was quite slow and hackish.

There are still quite a few limitations in PostgreSQL 10's partitioning:

In the specific use case of time series, timescaledb improves this.

The main benefits will be:

It's a PostgreSQL extension. If it is packaged for your distribution, use the package. Else, just compile it.:

Then, put timescaledb in shared_preload_libraries in postgresql.conf, and:

in the database where you want to use timescaledb.

Depending on your context, you'll probably have one big table you want to partition, and a few others.

My tests were done on a single table containing a few meta-data fields (insertion timestamp, user id…) and a JSON containing the raw data to store, around 2kB.

Let's say you just created an events table. To transform it into an hypertable (it just means the table is partitionned),

chunk_time_interval is the size of each partition (in microseconds, here a week, by default a month).

We won't go into too much detail here. The important things to know are:

All of timescale's metadata is stored in the _timescaledb_catalog (list of the chunks and characteristics of the hypertable…), chunks (partitions) are hidden in _timescaledb_internal.

TimescaleDB uses executor hooks to intercept queries and redirect them to the correct chunk (and create chunks when missing), to get fast inserts. It also uses planner hooks to take advantage of the specific nature of the inserted data (sorted by time…).

From the user's point of view, there is no difference in using timescaleDB or a pure PostgreSQL.

For a DBA, it's a bit more complicated. Almost everything will work unchanged, except pg_dump, which will be a bit problematic. TimescaleDB provides scripts and functions to dump and restore the database, and these should be used instead: pg_dump won't dump an hypertable correctly as it has no knowledge of it's real structure and will restore the hypertable, the chunks, their indexes in the wrong order. You'll end up with duplicate indexes or errors. So use ts_dump.sh and ts_restore.sh if you need to export and import.

The PostgreSQL instance was configured like this (quite agressive):

Huge pages were activated and in use for the shared_buffers.

Our test data's event table was very similar to this:

The inserted json was ~2kB.

For insertion, a Perl script was written to insert records as fast as possible, using 16 sessions. It generated different uuids, almost all increasing created_at's timestamp (with a random variation to be closer to reality), and edited parts of the JSON such as the categories to have a random list of categories. For our use case, we cannot lose one record, so each insert was in its own transaction (which is bad).

In all the following benchmarks, IO was not a limitation, because of the very fast storage. IO use was much lower with TimescaleDB though.

It's quite logical: there is no way we can guarantee unicity of this column across all chunks, which are in fact separate tables. So the primary key was transformed into a simple index.

The same benchmark was performed, without timescale and with it. Here is the graph: 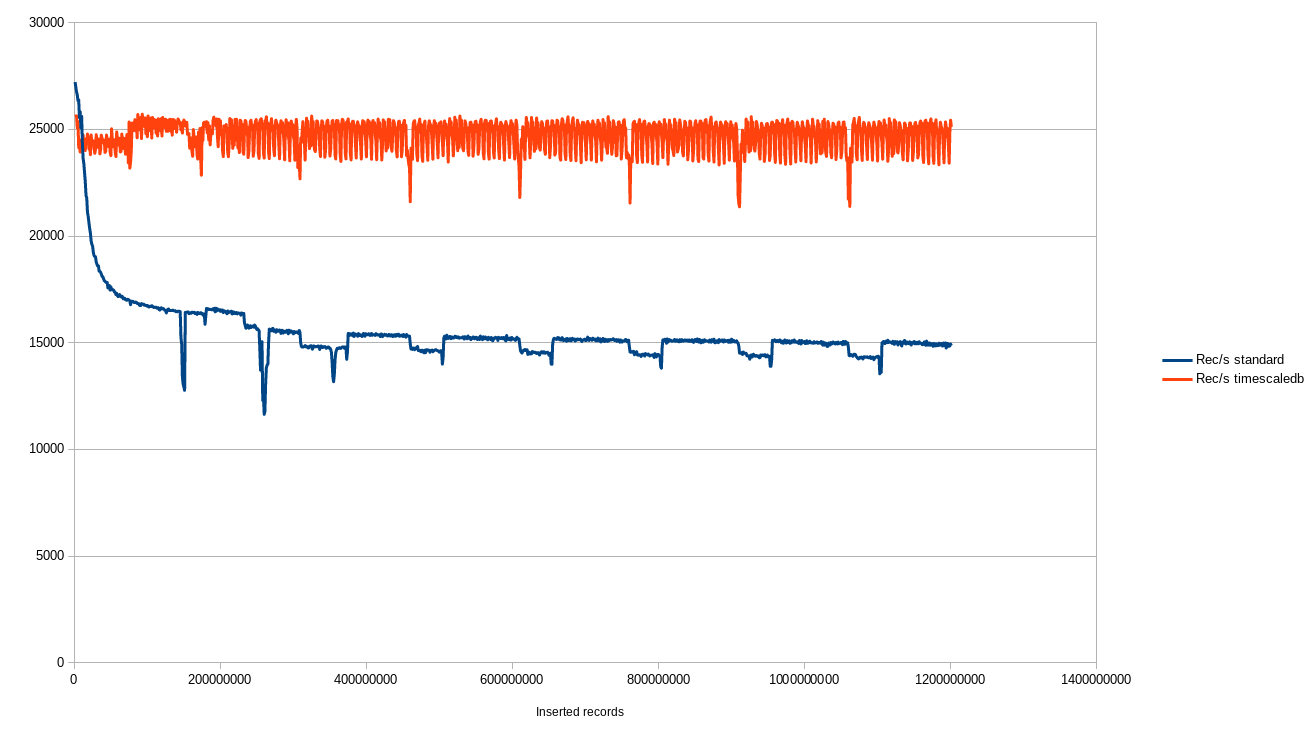 There are quite a few things to note:

Test cases were very different: we are inserting quite big records, had a large amount of memory (256GB), and very fast storage (much faster than TimescaleDB's storage). Indexes were small compared to the total size, and never out of the cache in our test setup. So we don't have the steep degradation… we still have more cost to maintain indexes, but the indexes' cost seems to be grow logarithmically, as it should be when cache problems are not involved. At the end of this benchmark (1 terabyte inserted), intermediary pages in the indexes weighted for around 0,3% of their total size.

What would make us chose TimescaleDB are mostly the following points:

What would prevent us from using it (or at least give us second thoughts):